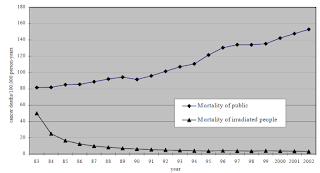 Comments:
Here is a more recent paper that isn't behind a paywall.
https://www.ncbi.nlm.nih.gov/pmc/articles/PMC5729469/

It looks like the initial study was confounded by the low average age of the radiation exposed population (the authors mentioned that they didn't have average age stats at that time). Matched for age, cancer rates are slightly higher for adults, significantly higher for those exposed starting before age 20.

Luckily, this has minimal impact on prospects for nuclear energy, since exposure of the general population is extremely low on average. Also, only adults operate nuclear reactors.

The low average age explains the lower initial cancer incidence, but it does not explain the dramatic drop in time (i.e. with increasing exposure) of the exposed population.

So, I find the counter-claims to be inadequate rebuttal of the observed effects, in particular the trend of dramatic reduction in cancer rates with increasing radiation dose.