The False Promise of Renewables #1: Wind

Over at Climate Crocks, Christopher Arcus cites an article at Scientific American on the efficacy of wind power for reducing grid CO2 emissions.  Unlike other pieces I've seen on the subject, that one fails to cite any sources for its conclusion which is:

even if wind produced as much as 50 percent of Spain's electricity the CO2 savings would still be 80 percent of the emissions that would have been produced by the displaced thermal power stations.

This appears to be possible, if the rest of the grid mix is compatible.  Hydropower is particularly well-suited, as it has no thermal-cycling limits and little in the way of startup delays.  However, hydropower cannot be assumed to be present with the wattage and water storage required.  Kodiak island can up its wind power and go diesel-free (so long as electric demand doesn't rise too high), but the rest of the world must deal with other constraints.

One of these constraints is the increased emissions due to more startups and low-load operation of powerplants that would otherwise run more efficiently; this leads to the net reduction in CO2 emissions from most RE being substantially less than their gross contribution to the grid.  Argonne National Lab studied this, and stated this in the abstract of the paper:


Our results for the power system in the state of Illinois show significant emissions effects from increased cycling and particularly start-ups of thermal power plants. However, we conclude that as the wind power penetration increases, pollutant emissions decrease overall due to the replacement of fossil fuels.

The question becomes, how MUCH do pollutant emissions decrease?  There's no fine print in the abstract's text, but what the words giveth, the graphic taketh away:

There's one obvious anomaly in the graph:  it strains credulity that the total emissions can decrease proportionally faster than the total fossil generation, as it does at the left edge.  This could be due to an error in the baseline introduced by a graphic artist.  But aside from that, the emissions curve is distinctly concave upward; well before the middle of the curve, total emissions do not fall as fast as total wind penetration.  There's the further question about the total amount of wind generation usable.  To achieve more than 40% penetration, the capacity factor of wind would also need to be on the order of 40% or else available power would frequently exceed total demand.  Without storage, the excess generation would have to be "curtailed" (spilled).  This increases the net cost per kWh.

Using my Gimp-fu to extract data points from the graphic, I get this table of data:

According to climate scientists, keeping total climate warming below 2°C¹ requires no less than an 80% reduction in total GHG emissions.  Even if we could draw a straight line between the 30% and 40% data points to a hypothetical 100% "penetration" way off the right edge of the graph, the total emissions reduction would only be about 61%; net emissions would still be twice as high as we can allow them to be.  Of course, expecting that curve not to bend upward to the right of 40% is a pipe dream.

I hear the objection coming up immediately:  "But wind isn't all there is.  Solar and other technologies can fill the holes in wind and push emissions down further!"  Sadly, solar PV (which is the only kind we're likely to see in private hands or outside sunny deserts) has a very low capacity factor; Germany's is about 11%.  Achieving more than 11% penetration gets into the same region where generation exceeds instantaneous demand, and the excess must be stored (expensive) or spilled (driving up cost per kWh, and also requiring a control system to manage generation).  Last, the emissions reductions from PV will be subject to the same diminishing returns evident for wind.

Conclusions:
Because of this, if we expect to de-carbonize our supply of electricity (and energy in general) we have to look to sources other than "renewables".

(A hat-tip to Willem Post for bringing the Argonne paper up!)

1  James Hansen and others opine that 2°C is well past the safe zone, and we need to shoot for no more than 1°C.  This requires a much lower ceiling on emissions, achieved much sooner. 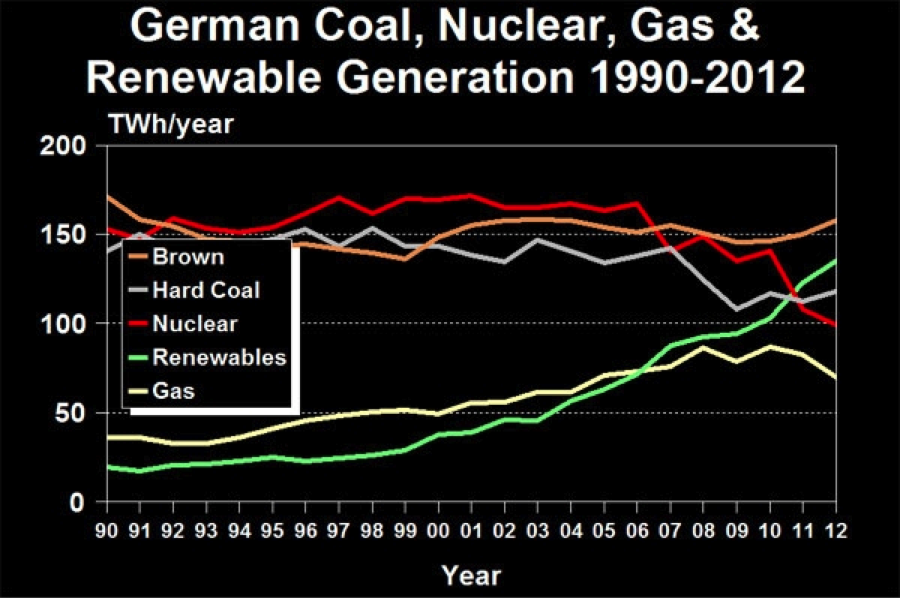 Don't ever think I don't like my new Fusion Energi.  It's literally the best car I've ever had.  But you have made some extremely annoying, unsettling or just plain counter-productive decisions (or bugs) in the software, and I wish you'd fix them.

Some of these are weird behaviors that have no obvious explanation:

But my biggest irritations are things that I ought to be able to get, but you deny me.


If you really want to thrill me, open up the full specs for the car's high-voltage systems and put me in touch with your product-development engineers.  There are a whole heap of options and applications that you haven't touched, and all you need to turn the marketplace loose is an open specification for plugging in.  Play your cards right and you could start the PC revolution, only with plug-in vehicles.  Think about it.  But don't think too long, because the rest of the world is ready to steal a march on you.  ¶ 12/14/2013 03:47:00 PM 3 comments

It was 71 years ago today, December 2 1942, when the very first controlled nuclear chain reaction on earth was started in the "atomic pile" built in the squash court at the University of Chicago.  Rod Adams has more details.

Exactly 15 years later, the first commercial nuclear power station at Shippingport went critical for the first time.  Thus swords were beaten into plowshares, and 56 years on some 1.8 million people who would otherwise have lost their lives to air pollution from fossil-fuel combustion lived instead.

Now we need to clear the air of something far less obvious than smoke and acids, but much more critical to the earth.  Let's hope we wise up in time.