I have been reading the PhD dissertation of Vaclav Dostal for information and inspiration, and I came across a graphic which shows the difference between the bulk of a steam turbine system, a helium turbine (proposed for high-temperature nuclear reactors) and a CO2 turbine system (a cheaper alternative to the helium turbine).  Here it is: 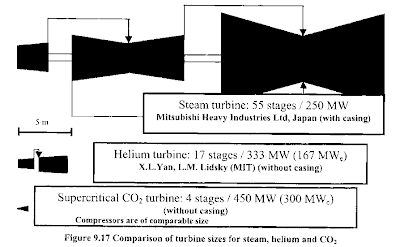 In raw numbers, the CO2 power turbine is 0.6 meters radius (about 4 feet diameter) and 55 centimeters (less than 2 feet) long.  The compressors would be even smaller.  Yet this small bundle of turbomachinery, which would easily fit in a couple of pickup trucks, could crank out 450 megawatts.

Using the supercritical CO2 recompression cycle, the turbomachinery for a gigawatt powerplant could fit in your bedroom.  Think about that for a minute.

Small is not just beautiful.  Small is also cheaper, easier to build and quicker to install.  In the necessary repowering of the energy systems of the USA and the world, small, beautiful, efficient, elegant systems like this need to be pushed to center stage.

It turns out that the stimulus has produced many fewer jobs than claimed.  In some cases, stimulus money produced no jobs at all or simply prevented employees from jumping ship for better pay.

When the histories are written, I suspect that the stimulus (and TARP, and the Federal Reserve's immense expansion of the money supply at a near-zero interest rate) will turn out to have gone mostly to cronies of the powerful.  If this country does not move immediately to rein in and punish graft and corruption and recover ill-gotten gains, we deserve what we're about to get.

The Associated Press reports via Yahoo News that a Florida man, fired from Home Depot because he would not adhere to the company uniform, is suing for religious discrimination.

It appears to me that the company has an airtight case.  FTA:

"This associate chose to wear a button that expressed his religious beliefs. The issue is not whether or not we agree with the message on the button," Craig Fishel said. "That's not our place to say, which is exactly why we have a blanket policy, which is long-standing and well-communicated to our associates, that only company-provided pins and badges can be worn on our aprons."

Fishel said Keezer was offered a company-approved pin that said, "United We Stand," but he declined. [emphasis added]

The plaintiff's statement that the quote on his religious button is from the Pledge of Allegiance (the post-1954 version) is irrelevant.  It isn't part of the uniform, which Home Depot required him to wear as a condition of employment.  Instead of wearing the button only during his non-working hours, he now has the opportunity to find an employer with a dress code more to his liking.  Suing because he was not allowed to prosyletize while on the clock at Home Depot is absurd, and I hope the court summarily dismisses this action and sanctions his attorney for filing a frivolous action.
¶ 10/29/2009 05:02:00 PM 0 comments

Speculation on limits to growth

If I may offer a science-fictional scenario for techno-cornucopianism, the limit for earth-based society is when it becomes something like a living system which can reproduce its components from the local resources.  The elements of carbon, hydrogen, oxygen and nitrogen (CHON) are available just about everywhere in various proportions, and it is essentially impossible to run out of silicon, aluminum, magnesium, and many others because they form such a large fraction of the crust or dissolved oceanic solids.

Energy available to such a society is a substantial fraction of the sunlight reaching Earth's surface.  This is many times more than we use today, so even if a society based on such bio-mimic systems must plateau it will do it at a far higher level than the present.  The real issue is what happens if it becomes unstable.  That depends on how the designers choose to build the system.  A conventional industrial model can collapse from inter-dependency on parts, but if the bio-mimic systems are self-reproducing, the technological capability can sustain itself through a collapse of part of the system and rebuild afterward.  This is what we've seen with life for hundreds of millions of years.

I believe that our level of understanding will let us get to this state within the next century, perhaps the next 50 years.  All we have to do is keep going.  Right now our technological systems are in the state of auto-catalytic RNAs dependent on the supply of molecular building blocks from natural processes.  When we can synthesize anything we need from soil, air, water and sunlight, we will have broken through a great many resource limits.

We're going to have a contraction of oil supply henceforth, but if we can use electrified rail, battery vehicles and different living patterns to remove the need for that oil supply, we can still live well.  Replacing coal with nukes removes most of the impact of electricity on the environment.  Project Better Place has a plan for continuing something very close to BAU, though that's not a requirement to avoid a collapse.  What we need is the vision (like PBP) and the will to pursue it.  "If we don't change the direction we're going, we're likely to wind up where we're headed."